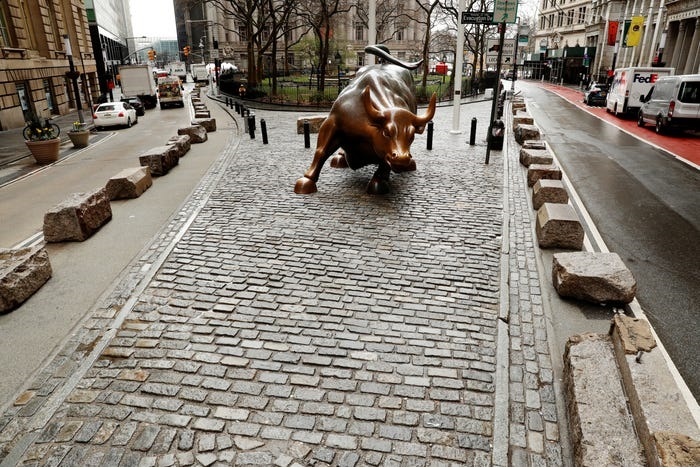 As you probably know, the markets have enjoyed a stellar April.  After hitting a low of 18,591 on March 231, the Dow has climbed over 25% since then.  (As of this writing, the Dow sits at 23,650.2) Technically, that means the brief-but-vicious bear market we endured in March is over.

So, does that mean the recent volatility is over, too?  To answer that, let’s recap what’s been happening in the markets over the last two months and what it all means for us.

February-March: How the coronavirus impacted the markets

Back in late January, when the world caught wind of an emerging outbreak in Wuhan, the immediate concern was how the virus would affect China’s economy.  The markets wobbled a bit during this time, but the hardest hits were still to come.

Within a few weeks, the markets realized that COVID-19 was no mere local epidemic.  This was not a repeat of SARS, but something far bigger.  As the virus spread across the world, concerns grew.  How would a global pandemic affect the global economy?  How would it crimp supply lines and consumer spending?  Would it cause a recession?

This was when the wild swings of early March started dominating the headlines.  But from an investor’s perspective, we still hadn’t hit rock bottom.  As the weeks passed, it became clear that we were experiencing something few had ever seen before.  The pandemic wasn’t just affecting people’s health, or the stock markets.  It was changing our daily lives.  As a result, concern grew again.  How long would this all last?  How many people would get sick?  How many would lose their jobs?

The Dow hit its all-time high on February 12 – the apex of the longest bull market in history.3  Within a month, it had fallen over 20%.3  It was one of the fastest slides in history, with several record-setting point drops.  There were more rough days ahead, but toward the end of March, the tide began to turn.

But while the markets seem to be in recovery, the economy has only gotten worse.  Approximately 22 million people have filed for unemployment in recent weeks, and that number is all but certain to go up.5  Economies all over the world are facing their sharpest downturns since at least the Great Recession.  And while some countries seem to be “flattening the curve,” the number of worldwide cases continues to climb, including here in the United States.

So, that begs the question: If the economy is struggling, why have the markets been doing so well?  Why are stocks not continuing to suffer, too?

There are two main reasons.

The first reason centers around the government’s response.  On March 25, Congress passed the CARES Act, a massive, $2 trillion stimulus package.  Among other things, it provides funds for both the unemployed and for businesses to keep their staff on payroll.  The Federal Reserve, meanwhile, has lowered interest rates to near 0%.6  The Fed has also pledged to buy hundreds of billions in treasury securities and mortgage-backed debt over the coming months in order to stimulate the economy. 6  More relief is in the works, and it will certainly be needed.  But these are important first steps, and they have helped to buoy the markets.

The second reason has to do with how the markets often work.  You see, the economy and the markets are not the same thing.  They’re related, but different — and they don’t always move in concert with each other.  The economy moves based on activity, like production, consumption, and trade.  The markets, on the other hand, move largely on anticipation.  When investors expect something will happen, they make decisions based off that expectation.  So, when the markets plummeted in March, it was based on the expectation that unemployment would rise, consumer spending would fall, and the economy would contract.

All those things have happened.  So why haven’t the markets continued to slide?  Because those developments have already been “priced in.”  The massive swings we saw in March were based on what is happening right now.  By the same token, the stunning climb we’ve seen in recent weeks is based on what investors expect will happen in the future — that the provisions of the CARES Act will kick in, more government stimulus will arrive, and the pandemic will end.

So, does that mean volatility is over?  To put it simply: no, it doesn’t.

Here’s why.  I mentioned a moment ago that the markets often move based off expectation.  But market volatility is driven by uncertainty.  When investors don’t know what to expect, they tend to get nervous — and the result is a topsy-turvy market.  Right now, there is still a lot of uncertainty.  We are dealing with a pandemic for which there is no playbook.  While we can make educated guesses, no one knows when this pandemic will end.  No one knows whether things will get worse before they get better.  To be frank, no one knows whether the government’s actions will be enough.  Should the headlines take a turn for the worse, we may well see the markets fall again.

In fact, that very thing just happened.  On Monday, April 20, American oil prices crashed below zero dollars a barrel.7  That’s the lowest in history!  I’ll send more information on this in the coming days, but you can probably guess how the markets reacted: negatively.  The Dow alone fell by almost 600 points. 2

Now, this doesn’t mean we are due for another round of wild swings like we saw in March.  Here’s what it does mean.  When the markets were in free-fall, I counseled you to avoid making any drastic decisions.  In fact, better to ignore what the markets were doing altogether then stress over what they were doing day-to-day!

My advice remains the same.  Just as we stayed calm while the markets were falling, we’ll also stay calm while the markets rise.  Just as it wasn’t time to throw in the towel when things looked black, we’ll also avoid irrational exuberance just because the sun is coming out.  My team and I rely on preparation, not predictions.  So, we must remain mentally prepared for more volatility in the weeks ahead.  If the markets recover entirely, and even climb to new heights?  Terrific!  We are well-positioned to take advantage of that.  If not, that’s okay too.  Remember, we are in this for the long term.

So, my advice is to focus on three things: Your family, your health, and your happiness.  My team and I will continue to focus on the markets.  As always, we will let you know the minute we feel any changes are necessary.  But in the meantime, we will remain in “watchful waiting” mode.

Of course, if you have any questions or concerns, please feel free to reach out via phone or email.  We are always here to serve you in any way we can.

Stay healthy, stay safe, and have a great rest of the month!