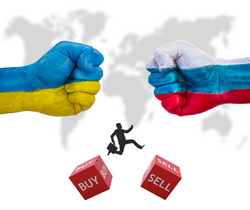 Q&A: How the Russian Invasion of Ukraine May Affect Investors

On Thursday, February 24, after months of tension and military buildup, Russia invaded Ukraine.  It’s the first major war between European nations in decades and brings significant humanitarian and economic ramifications for the entire world.  Now, as you can imagine, the markets fell sharply when the world woke up to the news of invasion.  There was a lot of worry in the media and market volatility throughout the day, but the S&P 500, DJIA, and NASDAQ all rallied and ended up in positive territory by market close.

First off, I want to assure you that my team and I have been watching the situation closely and analyzing how it may effect our clients.  We’ll go over some of the details in a moment, but the most important thing for you to know is that we are keeping a close eye on everything.  We remain confident in our investment strategy as well as the path to your financial goals.  We firmly believe that now is not a time to panic sell, but a time to stay invested in the market.  Additionally, now may be the time to get into the market with extra cash as downturns can present great potential buying opportunities.

In this message, I’m going to explain what effect this war is likely to have on both the global economy and on the markets in Question & Answer style.

Q: Why is this conflict impacting the markets?

A: You’ve undoubtedly noticed in recent weeks how volatile the markets have been.  The ultimate reason, frankly, is quite simple: uncertainty.  The market reacts to uncertainty with volatility.  For the first weeks of January, the uncertainty centered around interest rates rising.  Now, the uncertainty centers around how this war might disrupt the world and what effects it might have on production and trade.

When it comes to the global economy, Russia and Ukraine are key players.  For example, both together comprise 29% of the world’s wheat.1  Ukraine alone is one of the world’s top producers of corn, while Russia is Europe’s largest source of both oil and natural gas.  Both countries also play a major role in producing minerals and metals – think copper, nickel, platinum, etc.

These are not products the world can live without.  From the U.S. to China, from Germany to Ghana, we depend on these products to eat, communicate, get to work, grow crops, and even stay warm.  If you think of the global economy as a big spider web, touching a strand on one end causes the entire web to vibrate – sometimes violently.

Now, there are steps both Europe and the United States can take to mitigate these issues.  (More on that in a moment.)  But given that we are still recovering from supply disruptions caused by the pandemic, war is the last thing the world needs right now.

Another reason this conflict is impacting the markets is because of the shock it will have on the global financial system – in the form of economic sanctions the West has started levying on Russia.

Q: What are the U.S. and European Union doing about this?

This is not a war between the United States and Russia.  Currently, there are no plans to send U.S. troops into Ukraine.2  While American forces have reinforced several nearby countries like Poland and Romania, these are fellow NATO members.  Ukraine is not a member of NATO, which means NATO is not bound by the terms of its alliance to defend it from invasion.  Instead, the U.S. will support Ukraine by providing supplies, intelligence, and logistical assistance.

Because Russia’s actions are both a violation of international law and its own pledge to respect Ukraine’s borders3, the U.S. and many other western countries have announced a number of economic sanctions.4  Some of these sanctions include:

According to President Biden, these sanctions are just the first wave, with more soon to come.

But sanctions take time, and alone won’t stop Russian forces from invading Ukraine.  They can also be a double-edged sword.

Since World War II, Europe has become more economically intertwined to prevent another devastating conflict.  (This idea was the impetus behind the European Union.)  Since the end of the Cold War, Europe has also worked to make Russia a more integral economic partner.  The idea was that the more East and West relied on each other for trade, the less likely war would ever break out.

While this experiment has largely been successful, there’s a downside.  Trade in times of peace brings mutual gain – but nixing trade brings mutual pain.  Sanctions will undoubtedly punish Russian banks and companies that depend on foreign business.  But it can also hurt U.S. and European firms that rely on business with Russia.  This is another reason the war is disrupting the stock market.

Q: Okay, so let’s focus on what’s happening here at home.  How long will market volatility last because of this?

Obviously, that’s impossible to say.  Furthermore, trying to guess – and then making decisions based on a guess – is one of the worst things we as investors can do.  So, we’re not going to do it!

That said, there are some interesting things to note here.  First is that, historically, geopolitical crises often have a surprisingly short-lived effect on the markets.  For example, take the Cuban Missile Crisis.  The world has never been closer to nuclear war than during those nerve-wracking thirteen days in 1962, yet during that time, the Dow only fell 1.2%.  By the end of the year, the Dow was up 10%.6

Remember when Iraq invaded Kuwait back in 1990?  The Dow declined more than 18% in the immediate aftermath – only to recover completely a few months later, and indeed climb 38% over the next two years.7  Eleven years later, after the September 11 attacks, the Dow fell over 14%, but returned to normal a few months later. 7   More recently, look at Brexit.  When the UK voted to leave the European Union, it took most analysts by surprise, and many predicted it would lead to a major drop in the markets.  At first, it did.  The vote took place on a Thursday.  The next day, the Dow fell over 600 points, and then another 250 points the Monday after.8  But less than a month later, the Dow climbed to a new record high.

As you can see, while geopolitical events often seem scary to investors, their impact on the markets isn’t necessarily huge.  That’s because many things impact the markets.  Even something as big as war is only one ingredient in the dish.

On the other hand, financial experts like to say that “Past performance is no guarantee of future results.”  So, just because history has leaned one way doesn’t mean it can’t shift course in the future. This current crisis could have a sustained impact on the markets for all the reasons we’ve discussed.  There’s no way to know – meaning we need to be mentally and emotionally prepared for both possibilities. My team and I are well prepared.

Another thing we need to prepare for is the possibility of higher prices here at home.

Q: So, how will this war affect our own economy?

There’s no point beating around the bush: Consumer prices are already sky-high and are now likely to rise even higher.

Due to the pandemic, inflation has risen at a historic rate.  New sanctions and supply-chain issues will only compound the problem.  For that reason, it’s very possible we’ll see a jump in prices for the following goods and commodities:

The U.S. can release oil reserves to combat rising fuel prices, and Europe can turn to other places for natural gas and wheat. (Including the United States.) But while these measures can help, they’ll take time – and can only blunt a rise in consumer prices, not stop it entirely.

Interest rates may also be affected. Most experts expected the Federal Reserve would soon announce significant rate hikes to combat inflation. In light of the invasion, interest rates will probably still go up, but might be less than previously thought. That’s good news for the stock market, at least in the short term, but it won’t help slow inflation as much.

Whew! I just threw a lot of information at you, didn’t I?  Well, take a breath, grab a sip of water, get up and stretch your legs – and then let’s cover the fifth and final question.

Q: Given everything that’s going on, what should we be doing about it?

Prior to this week, the idea of one European country invading another seemed almost unthinkable.  It was something for the history books, not the front page.  But that’s the world we woke up to today.  A different world than the one we went to sleep to yesterday.

But here’s the thing to remember - the world is always changing – and we’ve always done a great job of adapting!

The situation in Ukraine will likely change every day, hour, and even minute.  Headlines you read in the morning might be obsolete by afternoon.  That’s why it makes no sense when investors panic, sell, or “cash out” just because of uncertainty.  By the time they do, the situation they’re reacting to may have already passed!  So, my advice?  Over the coming weeks, let’s keep doing what we always do.  Let’s keep our heads and hold to our long-term strategy.  After all, we already know that it works!

I hope you found this message to be informative.  Of course, please let me know if you have any questions or concerns about your portfolio.  My team and I are here for you.  We’ll keep monitoring the situation, and if anything changes, we’ll let you know immediately.

1 “How a Russian invasion of Ukraine could hit supply chains,” CNBC, February 23, 2022.  https://www.cnbc.com/2022/02/23/impact-of-russia-ukraine-on-supply-chains-food-metals-commodities.html

5 “The impact of Western sanctions on Russia,” The Atlantic Council, May 3, 2021.  https://www.atlanticcouncil.org/in-depth-research-reports/report/the-impact-of-western-sanctions-on-russia/